Speaker Vyacheslav Volodin said that it would “be right” to hold consultations with the leaders of the Duma factions next week, and based on the results, “consider” at the Council of the Duma an appeal to President Putin with a request to recognize the independence of the DPR and LPR. “MK” tried to figure out whether such appeals are a necessary condition for the recognition of a state. 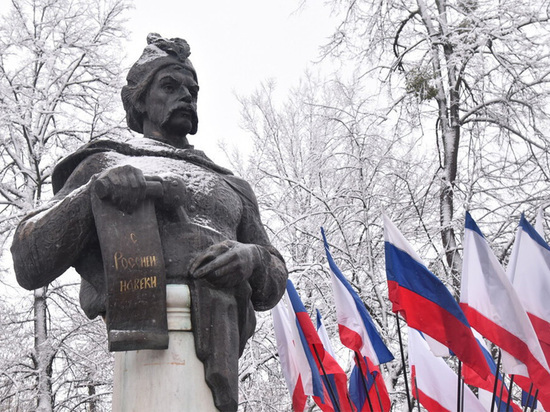 PHOTO: ADMINISTRATION OF THE HEAD OF THE DPR.

Draft resolution on the adoption of the Appeal “To the President of the Russian Federation V.V. Putin on the need to recognize the Donetsk People's Republic and the Lugansk People's Republic” was submitted to the State Duma on the evening of January 19, 2022, signed by an impressive group of communists headed by Gennady Zyuganov. Apparently, the authors were in a hurry, and therefore the text of the document contains, to put it mildly, clumsy and not quite literate phrases like “The new authorities of Ukraine, now glorifying the Nazis Bandera, Shukhevych and their followers, have become intolerant of historically established norms, life, as well as the will and the religion of the inhabitants of these regions” (deputy punctuation retained -“MK”).

Briefly, the essence of the grounds set out on more than three pages for President Putin to take an important foreign policy step is as follows: not a single point of the “Minsk agreements” has yet been implemented, Ukraine is trying to revise them or bury them altogether, has established a “complete economic blockade” of the territories of the republics, whose population back in May 2014 voted in referendums for self-determination. Recognition, the Communist Party is convinced, will protect the population of the DPR and LPR from genocide and “strengthen international peace and regional stability.” The authors appeal to “dear Vladimir Vladimirovich”: after recognition, it is necessary to conduct negotiations with the self-proclaimed republics as soon as possible “on the creation of a legal basis for interstate relations” on all issues, “including security issues.”

“Sergey Mironov has already stated that the Just Russia – For Truth faction is ready to support the project”, and “LDPR leader Vladimir Zhirinovsky spoke on a larger scale”, without specifying whether it was “for” or “against,” recalled speaker Vyacheslav in his telegram channel early on January 22 Volodin. (The leader of the Liberal Democratic Party really spoke on a very “large scale”: he is against conversion, because recognition will not give anything, and it’s better to just hit Ukraine hard).

The ER deputies, the speaker believes, “are also concerned about the issue of protecting the lives of Russian citizens and compatriots living on the territory of the DPR and LPR” … In general, the issue is important, responsible, and “it would be right to hold consultations with the leaders of the factions next week, to discuss this initiative. Then, based on the results, to consider the issue at the Council of the State Duma,” concludes Mr. Volodin. And he adds: Vladimir Zelensky really ignores the Minsk agreements, and NATO “wants to occupy Ukraine”, and “we must not allow this”, we must somehow protect our compatriots …

Does the speaker's statement mean that the State Duma in the near future will definitely turn to President Putin with a request to recognize the independence of the DPR and LPR by voting for the initiative of the Communist Party of the Russian Federation?

No, it doesn’t mean.

The next Council of the Duma is on Monday, January 24th. If “next week” consultations only begin, and the Kremlin and the Foreign Ministry consider public discussion of the issue harmful, its consideration in the meeting room can be postponed to February. Or even for an indefinite time.

It is worth recalling that in 2018, another draft statement on Ukraine was submitted to the State Duma – moreover, on behalf of representatives of all, without exception, the Duma factions included in the Committee on CIS Affairs. This much less concrete and binding document on the President of the country stated: “The deputies believe that the Russian Federation should provide additional assistance to the suffering population of Donbass, all necessary measures, including legislative ones, have been taken to provide asylum in Russian Federation to citizens of Ukraine who are threatened and politically persecuted in Ukraine. Do you think they accepted it? No. Until now, it lies quietly in the Duma legislative portfolio … In it, in this portfolio, a lot of things have been lying for years and even decades.

Assessing the prospects for the adoption by the State Duma of any document on foreign policy issues, one must always remember: without agreement with the Kremlin and the Foreign Ministry, this is impossible in principle. This means that if an appeal to the president with a request to recognize the independence of any territory is supported by the Duma majority, this will mean that the decision to recognize independence has already been made at the very top. And here a lot depends on the development of the situation, on the course of negotiations with the West, on whether or not provocations happen on the line of contact between Ukrainian troops and self-defense units of the DPR and LPR.

If we approach the issue legally, then the recognition or non-recognition of any state is the power of the head of state, no appeal from the deputies is necessary for its registration. In addition, in principle, all appeals and statements of the Russian parliament to anyone else have no binding force for the executive branch, and even more so for the head of state. But in order to make the Kremlin's decision more colorful and politically convincing, it may well be preceded by a parliamentary decree: they say, the representatives of the people asked, and unanimously …

This is how Russia's recognition of the independence of South Ossetia and Abkhazia was formalized in 2008.

On August 21-22, 2008, these parts of Georgia, which declared themselves independent back in 1992, turned to the leadership of the Russian Federation with a corresponding request. On the same day, on August 25, both chambers of the Russian parliament, both the Council of the Federation and the State Duma, which gathered urgently, almost unanimously adopted the same appeals to the then head of state, Dmitry Medvedev. Moreover, the draft appeal of the State Duma was signed by members of the Committee on CIS Affairs from all factions without exception.

It is curious that the last paragraph of their current appeal to President Putin regarding the DPR and LPR was written off by the communists from that old decree: then it was also said on the need to recognize and “promptly conduct negotiations in order to create a legal basis for interstate relations that regulates all aspects of cooperation and mutual assistance, including security issues” …

The President of Abkhazia Sergei Bagapsh and South Ossetia Eduard Kokoity took part in the meeting of the State Duma on August 25, 2008 and spoke from the Duma rostrum. And the next day, by decree of President Dmitry Medvedev, the independence of Abkhazia and South Ossetia was recognized by Russia. And immediately began the very negotiations that ended with the signing of the Treaty of Friendship, Cooperation and Mutual Assistance.

Here it was already impossible to do without the State Duma and the Federation Council: international treaties required ratification by the parliament. At the end of October 2008, this ratification took place. Russia and the two newly recognized states, in accordance with the treaties, pledged to provide each other with all kinds of assistance, including military. Russian troops received the right to be (and are still) on the territory of Abkhazia and South Ossetia, and the right to build military bases there …

The development of events may look something like this in the case of Russia’s hypothetical recognition of the independence of the DPR and LPR: the self-proclaimed republics turn to the authorities of the Russian Federation, President Putin makes a decision, securing the political support of the parliament, and then agreements are concluded with these republics, even if not recognized by the rest of the world, according to which Russian troops and Russian military bases end up on the territory of Eastern Ukraine.

But even if events develop according to this scenario, fraught with serious consequences, and the Kremlin decides that preliminary approval of the parliament will not hurt, it is unlikely the appeal proposed by the communists will be accepted. “I would like to note that now, when the situation is so tense and so sensitive, it is very important to avoid any steps that could provoke an increase in this tension,” presidential spokesman Dmitry Peskov told reporters on January 21. And he added that “for those who are the authors of this initiative, it would be important in the first place not to try to earn some political points on such a thin and fragile matter” …

← The political scientist assessed the talks between Lavrov and Blinken in Geneva: “We checked the clock” U.S. introduces “Putin Accountability Act” →