How Ukraine is fighting: how many and what kind of weapons Kyiv received from the West

In less than six months, Ukraine will receive Western military assistance worth more than the military spending of Italy, Canada or Poland for the whole of 2021. What is Ukraine fighting with? 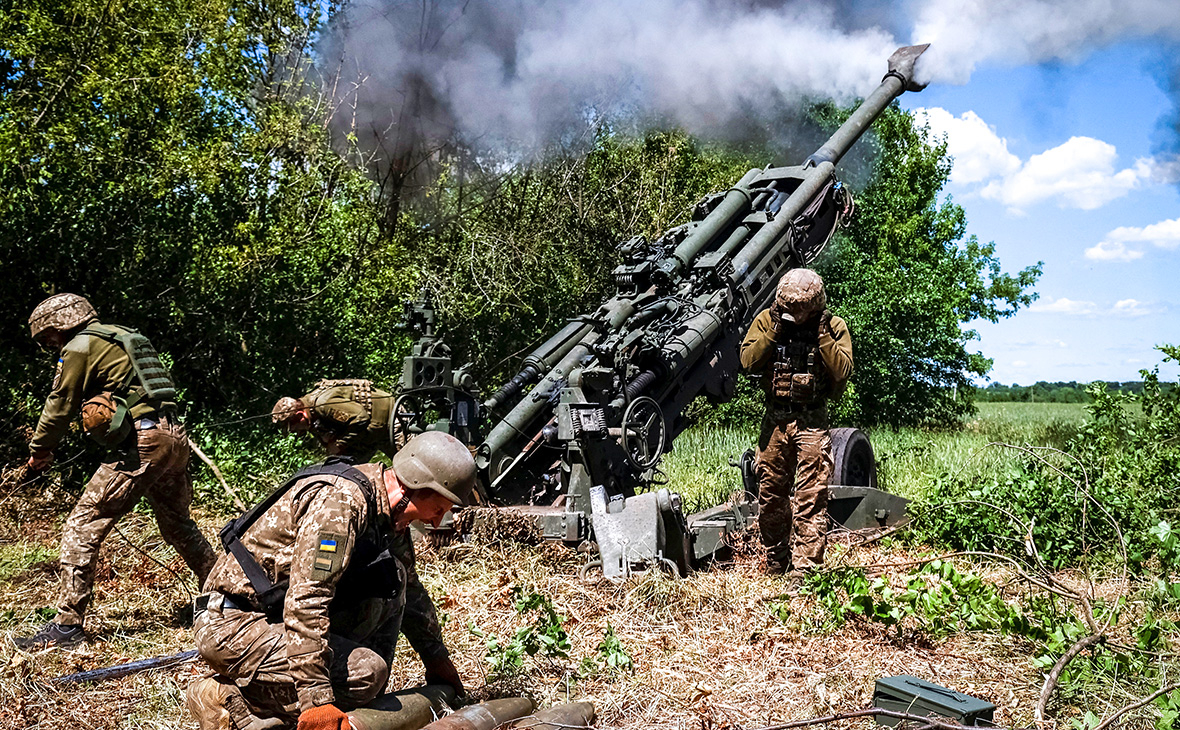 After four months of Russia's special military operation in Ukraine, European and Western countries have supplied or committed to supply Kyiv with weapons, military equipment and funds for military purposes totaling approximately $38.5 billion. This is more than allocated for military spending last year, for example, Italy, Australia, Canada or Poland (according to SIPRI). Russia, which ranks fifth in the world in terms of military spending, allocated $65.9 billion for defense purposes in 2021.

How did they help, what did Western and European countries promise to Ukraine, and how did this help affect the course of hostilities— in RBC material.

Estimates of the number of delivered equipment and its total cost are approximate. The total amount did not include equipment that was delivered to Ukraine, but its quantity was not disclosed. Some of the prices taken as a basis for calculations are catalog prices.

The study was based on reports from the Russian Ministry of Defense, Pentagon press releases, data from the Ukraine Support Tracker project of the Kiel Institute for World Economy and media publications.

The data collected includes both military assistance provided and promised from January 24 (the day some NATO countries put their troops on alert) to June 22.

What kind of weapons Kyiv had and got

At the time of the start of the military operation, the Armed Forces of Ukraine, together with the National Guard, numbered 260.2 thousand military personnel, follows from the data published by the Russian Ministry of Defense at the end of March. The Ukrainian army had 2,416 tanks and other armored combat vehicles, 1,509 field artillery guns and mortars, 535 MLRS, 152 aircraft, 149 helicopters, 36 Bayraktar TB2 UAVs, 180 S-300 and Buk M1 air defense systems. , 300 radars for various purposes.

The Russian special operation began on February 24, and two weeks later, the Russian military announced the destruction of 90% of Ukrainian airfields and anti-aircraft missile systems.

From the data of the Kiel Institute for the World Economy, which cover the period from January 24 to June 7, as well as from official statements by Western and European officials made after June 7, it follows that since the beginning of the year, from artillery Ukraine received:

Frommultiple launch rocket systems (MLRS), the Armed Forces of Ukraine have at their disposal:

Tanks that went to Kyiv:

To date, only one air defense (AD) system sent to Ukraine, and another promised for delivery, also delivered three nanti-ship missile systems(Ministry of Defense of Ukraine confirmed receipt of one).

From helicopter technology Ukraine has received three helicopters so far, another 19 have been promised.

As for light weapons, ammunition, equipment and equipment, it is stated that at least delivered (no information on the number of some deliveries): 117,532 helmets, 53,411 body armor of various types, 8,712,832 NATO-type rifles, 45,031 Soviet-type rifles, as well as cartridges for them, 1,470 grenade launchers, 107,500 hand grenades, 5,775 machine guns and submachine guns, various ammunition for howitzers, mortars and other things in the amount of about 8.1 million pieces, thousands of radio encryption devices, at least 4 tons of fuel, several thousand Starlink terminals for communicating with satellites, as well as an unknown number of satellite images worth tens of millions of dollars.

Who and how supplied

Since the beginning of the military operation, President of Ukraine Volodymyr Zelensky has constantly stated that the country needs heavy weapons, such as tanks, artillery, and armored vehicles. By the end of March, only the US, Estonia, and Poland had sent heavy weapons to Ukraine, while most European countries were sending infantry weapons or man-portable anti-tank missiles (like Javelin, NLAW, or MILAN launchers). The situation changed in April, when a number of countries, including Canada, the Czech Republic, Australia, France, Belgium, Germany, the Netherlands, Denmark, Lithuania, Spain, Portugal, Slovakia and Latvia, pledged to send heavy weapons to Ukraine.

According to the data cited by the Kiel Institute of World Economics, the United States is in the first place in providing military assistance to Ukraine (both financial and delivered/promised equipment). Great Britain is next, Poland is in third place, fourth & mdash; Germany, completes the top five Canada. This is followed by Norway, the Czech Republic, Greece, Estonia and Latvia.

However, if we take into account only the delivered equipment and exclude promises, as well as financial assistance for military purposes, then the first half of June, the United States delivered only about 50% of the promised (while remaining leaders in supplies), Great Britain— 90%, Czech Republic— 58%, and Germany— 35% of the declared amount.

Ukrainian officials have repeatedly criticized Berlin for being slow to deliver weapons promised to Kyiv. In particular, in May, Ukrainian Ambassador to Germany Andriy Melnyk accused German Chancellor Olaf Scholz of neglecting Ukraine's interests. “Militarily, Berlin simply abandoned Ukraine,” — Melnik said. At the same time, Ukrainian Foreign Minister Dmitry Kuleba criticized Germany for delays in the supply of “much necessary for the Ukrainian army”; weapons. “We dream of the Leopard (the main German battle tank.— RBC), but we are still far from that … And then there is the saga of the “Cheetahs” (anti-aircraft self-propelled gun.— RBC), but I need popcorn to wait for it to complete»,— the minister said.

That is, if we take into account the actually delivered military equipment, then the first place remains with the United States. It was they who supplied more than a hundred M777 howitzers, 100 Humvee highly mobile multi-purpose wheeled vehicles, two hundred M113 armored personnel carriers, 800 Stinger and 2000 Javelin air defense systems, three Mi-17 military helicopters, 700 Switchblade kamikaze drones (partially delivered, it is not possible to isolate the exact number ), more than 120 Phoenix Ghost drones (partially delivered), a number of RQ-20 Puma hand-launched reconnaissance drones, and millions of dollars worth of satellite imagery.

Since the beginning of the year, Western and European countries have provided or promised to provide military assistance to Ukraine (in equipment or finance for military purposes) for a total amount of $38.466 billion.

Director of the Center for Comprehensive European and International Studies at the National Research University Higher School of Economics, expert of the Russian International Affairs Council Vasily Kashin notes that the assistance provided to Ukraine in a few months exceeds military spending in a year in many European countries and is already comparable to Russian military spending ($65.9 billion in 2021 ). “In reality, the volume of military assistance to Ukraine in annual terms will be significantly larger than the Russian military budget. That is, de facto, we are talking about Russia's war with the entire Western world, where Ukraine provides territory and manpower,” — considers Kashin.

According to the calculations of the Ukrainian Ministry of Finance, Ukraine spends about $10 billion in a month of hostilities. On June 1, Volodymyr Zelensky said that 60-100 Ukrainian soldiers are killed every day, 500 people are injured every day. On the same day, Mikhail Podolyak, adviser to the presidential office, said that Ukraine's daily losses were between 100 and 200 people. A few days later, Vadim Skibitsky, deputy head of the Main Intelligence Directorate of the Ministry of Defense of Ukraine, said that Ukraine was “losing” Russia in terms of artillery. “Ukraine has one artillery unit for every 10-15 Russian artillery units. Our Western partners give us about 10% of what they have.

The Russian military has repeatedly reported on the destruction of equipment destined for Kyiv from Western and European camps. Nevertheless, some part of the deliveries still reaches its goal, the editor-in-chief of Arsenal of the Fatherland magazine noted in a conversation with RBC. Reserve Colonel Viktor Murakhovsky. “The deliveries of artillery, tanks and unmanned systems will be especially sensitive,” he specified. Murakhovsky notes that there are no known cases when Russian troops were knocked out from one position or another with the help of European or Western equipment. At the same time, these deliveries “go in bulk to the Armed Forces of Ukraine”; and thus “allow her to resist longer,” the expert summed up.

Of great importance in the conflict are several thousand Starlink terminals delivered to Kyiv for communication with low-orbit satellites, which ensure the controllability of the Armed Forces of Ukraine, Kashin said. Existing Russian electronic warfare (EW) systems are not very effective in jamming such communications, he explained. “Russia was working on creating an electronic warfare system capable of suppressing communications based on low-orbit groups, but by the beginning of the conflict, apparently, it was not in the series,” — expert noted.

Without which the Ukrainian defense would not have taken place at all, these are drones, Kashin notes. «Advertised «Bayraktars»— this is just the tip of the iceberg, more important is the constant flow of tactical reconnaissance drones, — the expert explained. Since the war is fought mainly by artillery, drones radically increase its capabilities and the capabilities of infantry units, Kashin added.

Another significant moment— this is the supply of ammunition and spare parts for Soviet-style equipment, as well as fuel and lubricants, says the interlocutor of RBC. In his opinion, heavy weapons systems are only in fourth place in terms of importance. Among these heavy systems, the vast majority do not provide any new capabilities, but are simply a replacement for disabled tanks and artillery, Kashin explains. “Warning items include new types of precision weapons, such as Brimstone missiles, Excalibur howitzer shells, and so on,” — expert added.