Why “the Englishwoman crap”: the roots of British Russophobia turned out to be very strange

“The Englishwoman shits” – this catchphrase originated in the 19th century, remained relevant in the 20th century and is still “more alive all living” in the 21st century. But this bird's-eye view of the situation ignores many nuances that aren't really nuances at all. 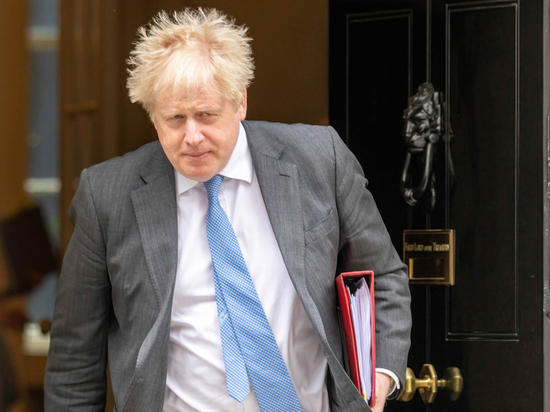 When, in 2004, Sir Roderick Lane left the post of British Ambassador to Moscow, he spoke in my presence in the spirit that there are no significant problems between our countries. So it was at that time – and there were episodes (which are actually not episodes at all) when our countries were allies in two world wars.

So what should be considered the historical norm – the state of affairs that seemed normal, natural and irreversible in 2004, or the hostility that surprisingly quickly re-created just a few years after this rosy statement?

I'm afraid the second. Respect for tradition is considered to be one of the most attractive features of the UK. But it is precisely this “attractive feature” that makes periods of detente in relations between Moscow and London rare and even fleeting…

In January 1801, Emperor Paul I ordered Vasily Orlov, Ataman of the Cossack Don Army, to set off to conquer British possessions in India. The imperial rescript amazed both Orlov himself and other high Russian officials. Between the borders of Russia and British India there were vast unconquered and not even properly explored territories inhabited by residents hostile to foreigners. But an order is an order.

In February, Orlov gathered an army of 21,000 men (at that time we modestly imagined the volume of British military capabilities in India) and moved in the direction of a potential enemy. “The trip to India”, however, was not particularly long. When Orlov was in the area of ​​the current city of Engels, Orenburg Region, he was caught up by the order of the new emperor Alexander, who replaced Paul, who was killed as a result of a conspiracy with British participation: everything is canceled.

The conquest of Central Asia turned out to be a long and painful process for Russia, which was completed only under the penultimate emperors in the second half of the 19th century. But it is by no means worth considering Orlov’s campaign as an insignificant historical curiosity. I don't know whether being determines thinking or thinking determines being. What I do know, however, is that for more than a hundred years, the foreign policy thinking of the British political class has been driven by the fear that the “Russian hordes” will take India from London.

There really was something to be afraid of. Acting on the principle of “divide and rule”, the semi-private and semi-state East India Company ousted all its foreign competitors from India, “tamed” the local kings and thus provided London with control over approximately half of all the then world trade.

London did not exaggerate the fragility of its control over India. In 1856, British troops in India, consisting of natives, began to equip a new type of rifle. This technical step almost became fatal for the British Indian possessions. A rumor began to circulate among the native soldiers that the paper casing of the new-style rifle cartridges was saturated with a mixture of cow and pig fat. Since the cartridge had to be bitten before using it, this created a completely unacceptable situation for both Hindu soldiers and Muslim soldiers. The pig is known to be an “unclean animal” in the eyes of Muslims, while the cow is a “sacred animal” in the eyes of Hindus.

The British, despite all their rich experience in managing foreign territories, did not discern the significance of this fact in time and tried to put pressure on them: did they give you a new rifle? Use it without talking!

The result was a powerful uprising. During its suppression, about six thousand British and 800 thousand local residents died. The forces of London were victorious. But the rebellion showed the fragility of British power in India. 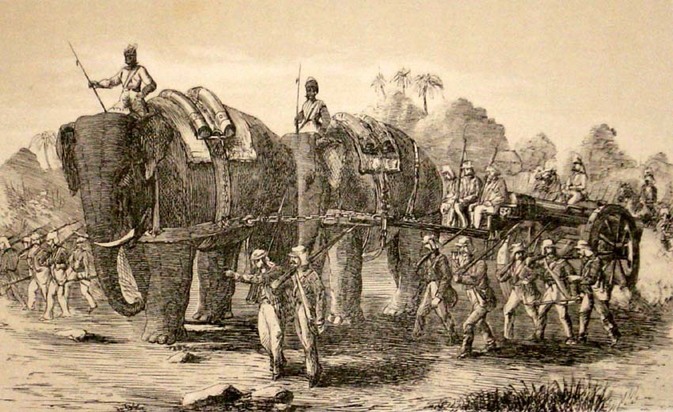 London politicians have constructed a nightmare scenario in their heads: what will happen to us if the opponents of our power in India enter into an alliance with a powerful foreign power? It is known that: skiff. And who could this powerful foreign power be? It is also known who: Russia.

The reality of this scenario is highly questionable. On the way between Russian possessions in Central Asia and the British Empire in India, there was such a natural barrier as Afghanistan – a territory that already in the 19th century successfully resisted attempts by foreigners (the same British) to establish control over it.

However, fear, as you know, has big eyes. The British understood that their power in India was based on successful diplomacy (let's set one raja against another!) and on bluff: a handful of Europeans were drowning in the “ocean” of the local population. The realization of this bluff and his vulnerability led to paranoia directed at Russia. This was especially true for Queen Victoria, who ruled during the heyday of the British Empire in the 19th century, and received the title of Empress of India in 1877.

Of course, by the middle of the 20th century, the fear of losing India had ceased to be relevant for the British. They lost it anyway in 1947 without any “help” from Moscow. However, the verb “lose” in this case is probably inappropriate. Control over India ceased to be profitable for London from a financial point of view: instead of earning a lot on it, they began to spend too much on it. As a result, the British simply got rid of India.

Yes, local politicians wanted and demanded independence. But they wanted a smooth withdrawal of the British from India – after reaching an agreement on the division of power, territory and other assets between Muslims and Hindus. However, London did not want to do this – it washed its hands and accelerated the granting of independence to India and Pakistan (the Muslim part of the former British India). As a result, immediately after the departure of the British, a bloody civil war began in their former Indian possessions.

It would seem that after getting rid of India, London had no reason left for its traditional hostility towards the Russians. But as soon as the old reason disappeared, a new one immediately appeared. And no, I don't mean the start of the Cold War. I mean the start of a “special relationship” between the UK and the US.

After the end of the reign of Queen Victoria in 1901, the British by inertia continued to consider themselves the strongest and most powerful country in the world for a long time. However, inertia cannot be infinite: after the end of World War II, the economically devastated foggy Albion became openly dependent on the United States. This led to a gradual but radical restructuring of the consciousness of the British political class: having lost the opportunity to “rule the world” alone, it seized on the opportunity to “remain a great power” as Washington’s junior but most trusted and beloved partner.

“Love” in this partnership, however, was and is one-sided. Paying the proper amount of compliments to “special relations between friendly peoples speaking the same language,” American leaders have always treated their “partners” with patronizing disdain. But this only made the British double their share of flattery.

The history of the “special relationship” is teeming with episodes humiliating for London. In 1965, then British Prime Minister Harold Wilson called US President Lyndon Johnson and announced his desire to go to Washington on an urgent visit. Johnson asked about the meaning of the proposed event. The British Prime Minister replied that he “wants to talk.” The President of the United States reacted to this like this: “There are telephones for this!”

Of course, there is a rational component to the British predilection for “special relationships”. The status of the UK as a nuclear power is directly dependent on maintaining its close ties with the US.

British Navy Trident ballistic missiles are made in America. If the US decides to break this partnership, then London will remain without nuclear weapons and thus turn into a minor state in its own eyes.

But where, in terms of “special relations,” does the rational end and the irrational begin? It seems to me that British politicians themselves do not fully understand or do not want to understand this. Apparently, deep reflections on this topic are too painful. Instead of agonizing and suffering because of the apparently unequal nature of the “alliance”, the British are trying to be more American than the Americans themselves – to catch any desires of Washington and run to fulfill them. 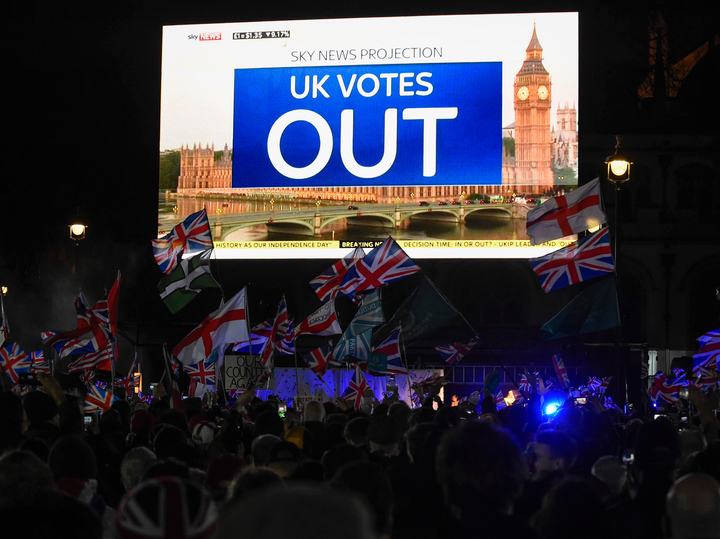 In 2016, another important circumstance was superimposed on this – the results of the referendum on the withdrawal of the United Kingdom from the European Union, unexpected for the British political elite. The break with the EU led to a deep internal split and a permanent political crisis. The themes and ideas that unite the political class are in acute shortage.

One of these “scarce goods” was the idea of ​​confronting Russia. Talking about this topic in London is safe and advantageous. No one will object.

But who organized these crises and why? We will learn about this in all details (if we learn at all) much later. So far, we can only state: “the Englishwoman is shitting again” – as if she never stopped doing it.

← A DPR soldier spoke about mercenaries in Ukraine: “There is just no one” Moldovan Prime Minister Gavrilitsa urged to maintain peace and stability →